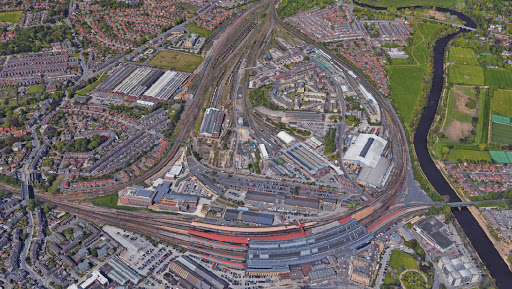 Whilst the COVID-19 crisis has posed unprecedented challenges to all local authorities, City of York Council has worked with partners to keep the award-winning 45-hectare brownfield regeneration plan moving.

The York Central Partnership – consisting of the Council, Homes England, Network Rail and the National Railway Museum – submitted a planning application to deliver the infrastructure needed to unlock up the site, last month.  In addition to this, £77m funding was secured in the Government’s March budget, completing the £155m package for infrastructure which will open up the site.

Considerable effort now focuses on York's economic recovery, with a series of roundtables taking place with city partners, business leaders and regional partners to inform the development of a short-term and long-term recovery plan.  An early recovery plan is due to be presented to a meeting of the Executive on 25 June.

“Our initial response to the pandemic has been swift and we continue to respond to the challenges posed by the virus. At the same time, considerable effort is ongoing to put in place the foundations to ensure York can come back stronger from this crisis.

“We are pleased that the partnership is in line to receive over £77m from the Government. York Central remains one of the most important and attractive regeneration sites in the country, something reinforced by the recent interest regarding the relocation of the House of Lords.

“The Council and its partners remain committed to delivering the scheme and the goals that underpin the project, to drive inclusive growth and create a new sustainable community in the heart of the city.  We will continue to ensure residents, businesses and local organisations have the opportunity to have their say on the scheme, as the proposals develop moving forward.”

The reserved matters application dealing with the infrastructure is awaiting determination by City of York Council, the local planning authority. To view the plans and comment, go to the planning portal https://www.york.gov.uk/planning-applications and search for 20/00710/REMM.

As the proposals continue to develop for York Central, further consultation will be carried out with local communities and organisations in the city, in order to provide further opportunity to shape the project.

As the largest landowners, Network Rail and Homes England secured outline planning permission in 2019. This established the principles of the regeneration, creating up to 2,500 homes and space for up to 6,500 jobs, together with a range of public spaces including the city’s first new park in a century.

York Central remains under consideration as the site for the House of Lords. Cllr Aspden has confirmed the city’s openness to the proposal.

The £155m package put together by the York Central Partnership includes a £37.2m grant from the West Yorkshire Transport Fund-plus and Leeds City Region Growth Deal, The Combined Authority has also provided £2.55 million of Growth Deal funding for the York Central via a mixture of grants and loans. This funding was used to support land acquisition and project development costs.

The West Yorkshire-plus Transport Fund has been part-funded through the Leeds City Region Enterprise Partnership (LEP) Growth Deal, a £1 billion package of Government funding to drive growth and job creation across the Leeds City Region. The aim is to create around 20,000 new jobs and add £2.4 billion a year to the economy by the mid-2030s.

The York Central development will provide a £1.16 billion boost to the economy. The 44 hectare brownfield site has exceptional transport links, access to one of the most skilled workforces in the country and has been designated an ‘Enterprise Zone’, offering even greater incentives for businesses to locate there.