Cllr Stephen Fenton met with Network Rail representatives on 24 February to ask them to pause plans to establish a compound on land off Moor Lane until February 2024. News of the proposed compound location came as a surprise to residents who received a letter from Network Rail on Friday 19 February. 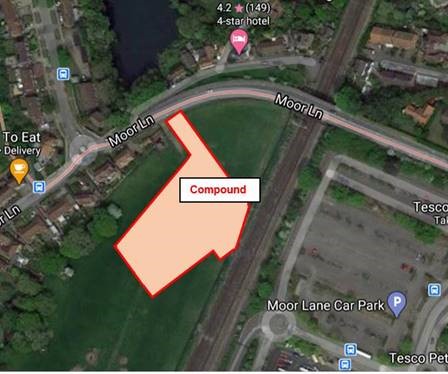 When asked whether the compound needed planning permission, Network Rail confirmed that it does not. They said:

“The Moor Lane construction compound benefits from deemed planning permission granted by virtue of Part 4, Class A of Schedule 2 of the Town and Country Planning (General Permitted Development) (England) Order 2015. Therefore, the compound does not require planning permission from the local planning authority in this instance.”

In response to the request for a pause, the Network Rail representatives at the meeting wouldn’t commit to this but said they would consider this request internally and come back with a response, hopefully in the next few days. Stephen said that he would be happy to meet Network Rail again at a time of their choosing.

Network Rail expressed a willingness to undertake more meaningful dialogue with local residents and Stephen suggested that the proposed pause would enable them to have these conversations and address issues of concern.

Network Rail committed to providing contact details for a senior colleague who will be able to liaise with the residents at 21 Moor Lane whose almost-completed house sale was scuppered by news of the compound plans.

During the meeting, Stephen was able to obtain some details of the proposed compound’s layout and operation.

Separately, Stephen has contacted the council’s Public Protection team to alert them to residents’ concerns about the potential for nuisance and disturbance to be caused by the compound’s operation.