City of York Council’s Full Council today (29 October) has rejected local government restructure in York, confirming that there is no functional, historical or logical reason to merge York with surrounding rural and coastal areas.

Since launching our survey, more than 4000 residents have already said they oppose the plans to merge York into an unaccountable and unrepresentative ‘mega-council’ 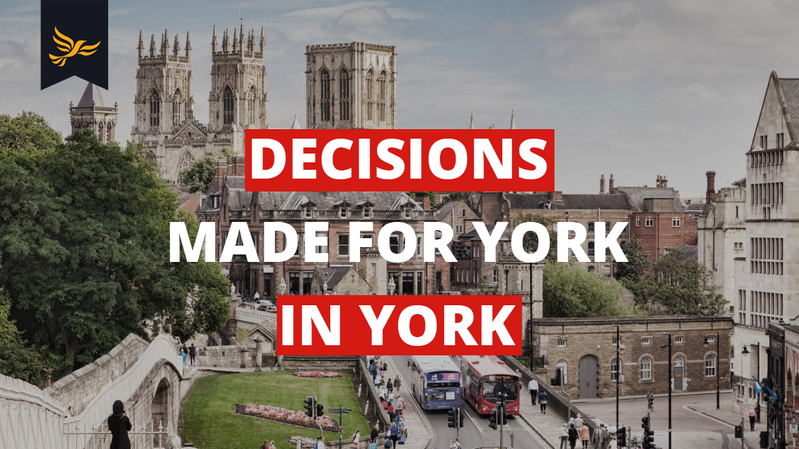 The Council’s response to the district council’s reorganisation proposals has been recently outlined in a damning report, which sets out the real extent of the impact that any change to York’s current boundaries and service delivery would have on the city and its residents.

This council report clearly shows how pushing York into a mega-council would lead to:

• an increase in council tax of £117 per year (based on an independent accountancy firm's calculations).
• With resources diverted away from York, residents would be paying more money for poorer services.
• Disruption to key service delivery across York, during a public health crisis.
• The end of the 800-year connection between the city and its council, with the role of the Lord Mayor possibly scrapped.

York Conservatives have doubled down on these disruptive proposals, with the two York Conservative councillors along with Tory MP for York Outer arguing for York’s residents to pay more council tax for disrupted services and further removed decision-making.

Resident and stakeholder consultation, alongside the analysis undertaken by the Council, both show strong support for decisions made for York to remain in York. The city’s response and recovery from Coronavirus must be at the forefront of the Council’s efforts at this challenging time. Business, health and education leaders have already written to the Government against the district proposals, supporting York’s existing strengths and opportunities as a unitary authority.

“York is a city with unique strengths and opportunities that can see us go from strength to strength. City of York Council is already working with partners to drive this work, and instead of talking about changing York, we should be making the case for York.

“The 'mega-council’ proposal fails to take into account the physical and economic geography of York and ignores the wishes of our residents, who rightly want decisions for York to be made in York, by people that understand our city and its communities.

“The best way to focus on protecting our residents and businesses through the ongoing health crisis and ensuring the city is in a position to ‘build back better’ is to back York remaining York.”

“York is well placed to secure a sustainable and inclusive recovery, providing the certainty and support that businesses across the city are in dire need of. This can only be achieved if our efforts are focused on building back and supporting our diverse economy, rather than wasting time and money on recreating services and rebuilding basic council functions.

“Any deal must be right for our businesses and residents, and we will continue consulting them throughout the devolution process. However, it’s clear that the proposal for a strategic partnership between York and North Yorkshire would cause as little disruption as possible at this critical time and would enable access to devolution and gain share as quickly as possible. This would see us access crucial investment in the long term recovery of our economy.

“The Government and local Conservatives should recognise the need to support local authorities and businesses in this vital and challenging time, rather than aim to rush through unnecessary reorganisation of councils and services. Until they do, we will continue standing up for our city’s residents, businesses and their right to have the best services and local accountability delivered without causing disruption, in what has already been a very unpredictable and challenging year for us all.”