Call for action on shops area 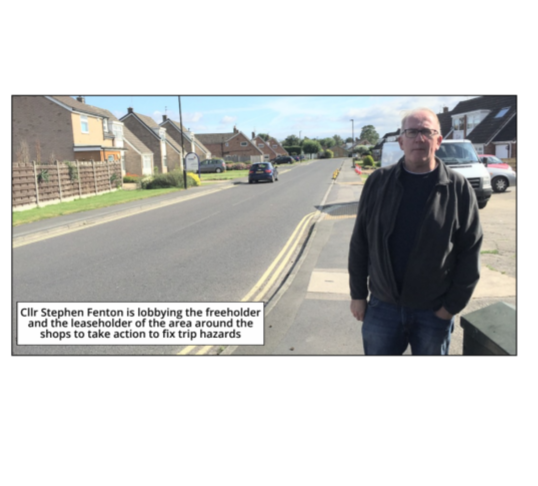 Local councillors are urging the landowners responsible for the area around the shops on Moorcroft Road to take urgent action to make the area safer for pedestrians.

Loose and cracked paving slabs have been reported on multiple occasions and commitments have been made that issues will be fixed, but so far no action has been taken. Because the land is privately-owned, the council is limited in the action that it can take, but Stephen has raised concerns with the Public Protection team to see if any pressure can be brought to bear.

Stephen has also set up an online petition at www.bit.ly/moorcroftroad

It is hoped that this will help to persuade those responsible to make some much-needed investment. Stephen commented “There are some fantastic local shops and services on Moorcroft Road, and they deserve to have the area well-maintained to make it even more attractive for residents. “The beds are kept in great condition thanks to the efforts of a local volunteer and thanks to the Community Group there is now a bench in front of the shops. All we are asking for is that the freeholder and leaseholder work with us to make further improvements.”

Stephen has also raised the issue of dangerous parking, with vehicles often driving across the pavement to park on the paved area. He has asked for a quote for some bollards to be installed on the back edge of the council-owned pavement (pictured above) to at least give pedestrians some protection on this stretch of path. It is hoped that safety measures on the privately-owned land will be actively considered.