In a Full Council meeting, York councillors have backed Lib Dem calls to lobby the Government to raise Carer’s Allowance by £1,000 a year, to help support 2351 unpaid carers in York during the coronavirus pandemic. 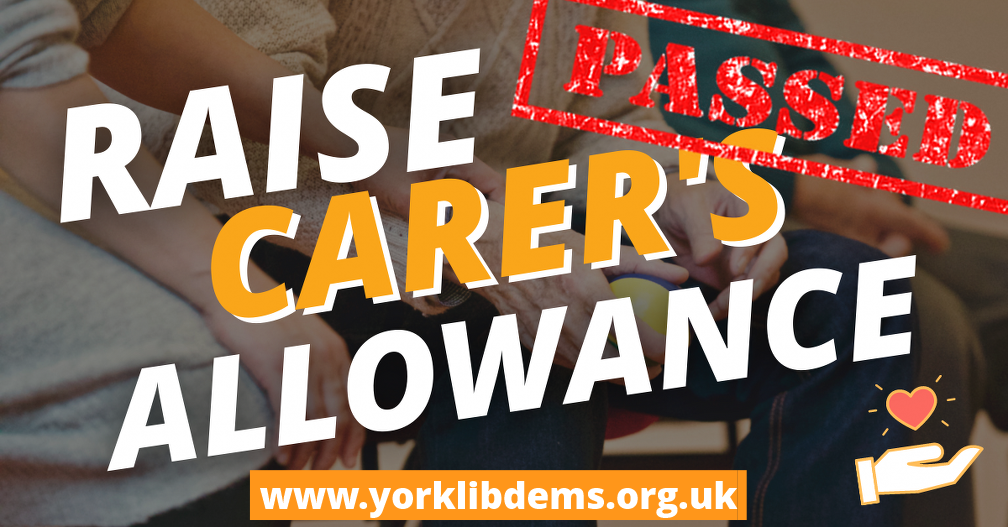 There are around 19,000 carers in York, but many people who provide care do not recognise themselves as a ‘carer’. The latest government figures suggest that 2,351 unpaid carers in York are entitled to receive Carer’s Allowance, although only 1,472 currently do, with the remaining 879 people, mostly older carers on low incomes, left out due to overlapping benefits.

Whilst the financial and emotional challenges faced by unpaid carers have been made far worse by the Coronavirus pandemic, full-time unpaid carers rely on Carer’s Allowance at just £67.25 a week - the lowest benefit of its kind. This allowance has not been increased during the pandemic despite the pressure on carers and economic impact of Covid-19.

With unanimous support, Full Council has endorsed Liberal Democrat proposals to increasing Carer’s Allowance from its current rate of £67.25 a week to £87.25, in line with the £20 a week uplift in Universal Credit announced at the start of the pandemic.

The motion, submitted by Liberal Democrat Councillors and backed at the Full Council meeting, called on the Council to:

• lobby national government to increase Carer’s Allowance by £1,000 a year, from its current rate of £67.25 a week to £87.25, in line with the £20 a week uplift in Universal Credit, including those who do not receive the Allowance due to overlapping benefits and with an equivalent increase in Carer Premium and Carer Addition.

• To call on the Government to expand the eligibility for Carer’s Allowance, by raising the earning limit from £128 a week to at least £139.52.

• To request that the Executive Members for Communities and Adult Social Care & Health bring forward a report to a decision session, to highlight the work and voluntary efforts of careers in the city, including highlighting the work of the York Carers Centre. This report should further identify what is and can be done to support carers in York.

“Caring for people’s health doesn’t stop at the hospital exit, or the GP’s surgery door, there are approximately 6.5million volunteers in the UK who look after a family member or friend who is elderly or has a disability, or a mental or physical illness.

“Carers in York have been at the forefront of the Coronavirus pandemic response and continue to do a selfless and remarkable job in very difficult circumstances.

“Despite this, the Government has overlooked carers and have failed to offer adequate support, and unpaid carers, in particular, have been left to face mounting financial and emotional pressures.

“Research shows that unpaid carers in the UK have saved the state £530 million every day of the pandemic. It is time to give them the support they deserve.”

Liberal Democrat Leader Ed Davey, who has been a carer for much of his life, said:

“Many carers are facing extreme financial hardship. They have been struggling for months, often relying on foodbanks to feed themselves and the people they care for.

“Liberal Democrats will stand up for carers and lead the way to a more caring society.”