Annual status report on the city’s air quality shows that concentrations of NO2 have continued to decrease since 2012. 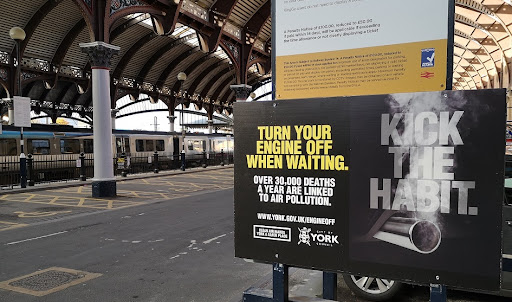 The report highlights the ongoing work in the city to reduce air pollution, as well as agrees the production of a new, fourth Air Quality Action Plan, which will include measures to further reduce nitrogen oxides and particulates from all sources in York.

The Council previously produced two Air Quality Action Plans in 2004 and 2006, despite these plans air quality in York continued to deteriorate between 2004 and 2010. To address this, York developed the UK’s first overarching Low Emission Strategy (LES) in 2012, based on reducing emissions from all sources, including vehicles and encouraging the uptake of alternative fuels and low emission vehicle technologies. The pioneering strategy has ensured that air quality has improved in the city since 2012.

The latest air pollution monitoring data indicates that the annual average air quality objective for NO2 (40µg/m3 ) was met at all monitoring sites in York in 2020.  The highest concentration of NO2 recorded at a relevant location was 40µg/m3 on Gillygate (equal to the objective). Only one site, a bus shelter on Rougier Street, recorded an annual mean concentration above the objective at 49µg/m3.

Analysis examining the impact of lockdown measures on ambient air quality in York throughout 2020 suggests that during the early part of the Covid-19 lockdown, nitrogen dioxide concentrations in some areas of York may have improved by up to 43% (average across all continuous monitoring sites was 30%).

“Improving the city’s air quality has been an issue Liberal Democrats have prioritised in York, from launching the UK’s first voluntary Clean Air Zone, leading the way nationally with the introduction of the largest zero emission Park & Ride fleet in the country, to investing in initiatives across the city which aim to tackle air pollution including tree planting, electric car charging network and electric waste vehicles. The results of this work speak for themselves.

“Whilst unsurprisingly, throughout lockdown we saw a major improvement in air quality in the city, it is important to note is that this follows a positive long-term trend that has seen carbon emissions decrease by 37% over the last decade.

“We will now take the opportunity to build on the momentum and continue investing in initiatives and measures which will help improve air quality for the benefit of our communities and generations to come. We must make cleaner air a lasting legacy of the pandemic.”